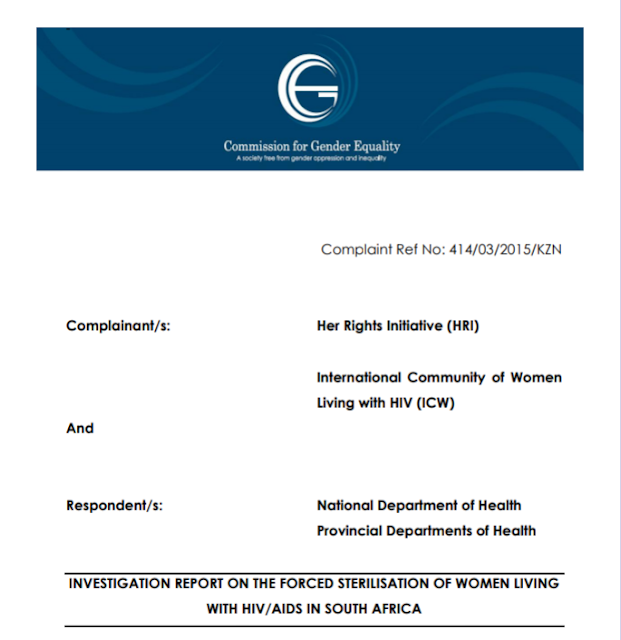 Reproductive justice is founded on three principles: the right not to have children, the right to have children, and the right to parent children one already has in safe and healthy environments. It understands that ‘choice’ in reproductive decision-making is directly enabled or disenabled by/through interacting systems of oppression. Owing to these interacting systems of oppression, people will have different experiences of reproductive freedom and oppression, something that needs to be well understood in order to ensure reproductive justice for all.

In February of this year, The Commission for Gender Equality (CGE) released its report on 48 reported cases of forced sterilisation that took place between 2002 and 2015 in 15 South African public hospitals in KwaZulu Natal and Gauteng. At the time of the violations, the 48 womxn, all of whom are black and most but not all of whom were HIV positive, were pregnant and had presented at public hospitals for medical assistance. All of the womxn gave birth at the hospitals via caesarean section and were sterilised whilst in theatre for the caesarean.  Immediately prior to giving birth and whilst during labour or in severe pain, some of the womxn had been asked or told to sign consent forms. Of these, while some womxn reported having been briefly told that by signing the forms they were granting their consent for sterilisation, others reported they had not been told that the forms were for sterilisation.  Few of the 48 womxn were not given consent forms nor told that they would be sterilised.

The report details various methods/tactics of coercion used to ensure that the sterilisations occurred. In addition to capitalising on the exhaustion, confusion, distress, and/or pain that may characterise giving birth, and insufficient/a lack of explanations about the sterilisation procedure (including its consequences), coercion tactics included misinformation, threats to withhold medical assistance (including the caesarean operation itself), and/or humiliation.

I wish to focus on the womxn’s accounts of the humiliation they faced at the hands of healthcare providers. In doing so, I do not mean to undermine or dismiss the importance of discussing the healthcare providers’ violation of informed consent principles and procedures- the CGE’s report addresses this aspect. Rather, focusing on some of the womxn’s accounts of humiliation, and the media representations of the forced sterilisation cases investigated by the commission will, I believe, reveal the usefulness and potency of a reproductive justice approach in our understanding of unjust social practices as well as feminist efforts to ensure justice for all.

Several womxn who were HIV positive reported being told that the sterilisation was necessary because womxn living with HIV cannot be permitted to have children. For example, one womxn reported being told that “women (sic) with HIV should not have children” (Commission for Gender Equality, 2020, p.45). Another was told “You HIV people don't ask questions when you make babies. Why are you asking questions now. You must be closed up because you HIV people like making babies, and it just annoys us” (Commission for Gender Equality, 2020, p.48). Similar accounts were reported in a South African study on the forced sterilisation of womxn living with HIV.

As stated earlier, most but not all of the 48 womxn whose cases were investigated by the CGE were HIV positive. Indeed, healthcare providers also humiliated womxn for other reasons. For example, one womxn was told that the sterilisation was necessary “because she had too many children” (Commission for Gender Equality, 2020, p.42). In other womxn’s cases, healthcare providers seemed to justify the sterilisation for other reasons such as because the womxn had TB, were poor and/or young. We also need to keep forefront the racialised aspect of this practice: all of the 48 womxn are black.

A reproductive justice perspective and feminist scholarship around reproductive politics enable us to see connections across healthcare providers’ justifications for forced sterilisation. When all of the justifications are taken together, and it is imperative that they must be, it is clear that in forcibly sterilising the womxn, healthcare providers were making judgments and drawing on public health discourses about which womxn are fit to reproduce. It is no coincidence that within mainstream public health discourses, parenthood by oppressed groups is constructed as a threat to individual and public health as well as the economy. Indeed, the healthcare providers’ judgments and use of public health discourses are features of and produced within systems of oppression which instate white, wealthy, healthy, older womxn as non-threatening, rightful, desirable legitimate parturient subjects and reproductive citizens, and in particular as having the (unconditional) right to have children and to parent them.

Newspaper coverage of the CGE’s investigation has rightfully framed the forced sterilisations as a humxn rights’ violation. Worryingly, however, some of the newspaper coverage of the CGE’s investigation have focused almost exclusively on those 48 womxn who are HIV positive. This could, perhaps, be due to the fact that the CGE’s report itself (particularly the analysis section) highlights the cases of the HIV positive womxn, which is possibly expected given that one of the two complainant listed in the report is an organisation that advocates for the interests of womxn living with HIV. Past research has indeed shown that womxn living with HIV are vulnerable to forced sterilisation practices. To re-present/frame the forced sterilisation practices documented in the CGE report as only happening to womxn living with HIV, or to highlight these cases and neglect others, is to reduce the forced sterilisations documented in the report to a single issue. This is problematic because doing so erases and diminishes the suffering of the womxn who were HIV negative, as well as the suffering of womxn who were HIV positive and black, poor, young and/or were deemed to have ‘too many children’. There are a number of implications of understanding this issue as one where it is only womxn living with HIV whose reproductive rights have been violated. Doing so: 1) implies that there are forced sterilisation practices that are more egregious, and therefore less tolerable than others (and vice versa); 2) prevents us in this instance from fully acknowledging and grappling with white supremacist, anti-poor and patriarchal systems that mean that in democratic South Africa, black poor womxn continue to experience population control measures that were a feature of the design and practices of apartheid; 3) prevents us from asking and exploring whether (black) people from other oppressed groups, such as poor people (including of all races), immigrant and undocumented migrant people, queer people, and people living with disabilities who are womxn, mxn and gender non-conforming might have similar experiences; 4) prevents us from seeing the connections across different experiences and practices of forced sterilisation; and 5) ultimately means that efforts to ensure freedom from forced sterilisation may rightfully uphold reproductive autonomy for HIV positive womxn, while leaving behind those who are deemed to be comparatively less worthy.

Reference(s)
Commission for Gender Equality. (2020). Investigation report on the forced sterilisation of women living with HIV/AIDS in South Africa. Accessed from http://www.cge.org.za/wp-content/uploads/2016/12/Forced-Sterilisation-Report.pdf
Posted by Feminism & Psychology at 04:22

Welcome to the Feminism & Psychology journal blog, which is a forum for debate at the interface of feminisms and psychologies. The F&P blog is a venue for discussion on the articles published or forthcoming in the journal. It also offers a space for authors and readers to converse about the content of the journal and other research, as well as a space to share news and events from the feminist community. The blog invites authors and researchers to introduce their work and ideas here, and to enter the wider conversation around feminisms and psychologies. If you are interested in writing a blog for us, please contact Megaera Jones at FAPEditorial@sagepub.co.uk for more information.