#MenAreTrash: What is this movement really about?

“To be a woman in this country is to constantly live in fear. Women can’t stay out too late or take moonlight meanders because their gender makes them prey. There are ravenous beasts out there who lurk in various spaces, threatening a woman’s very existence. In the club, in homes, on the streets, on campuses, in taxis, EVERYWHERE – women are not safe” – Blaque Life Quarterly (BLQ) 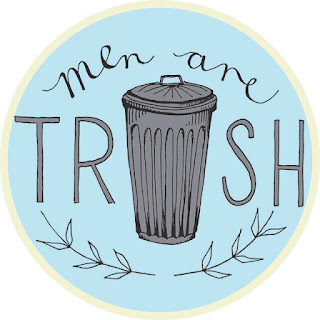 The #MenAreTrash movement in South Africa began last year when a number of women took to social media to call out the problematic behaviour of men with regard to the emotional and physical abuse they had been experiencing in their relationships. During this time, the hashtag did not gain the public’s attention as it recently did following the brutal murder of Karabo Mokoena, the rape and murder of 3-year old Courtney Pieters as well as many other women and children. After the above incidences, many women began sharing their stories recounting details of their lived experiences on various social media platforms. A thread of tweets shared by a woman about how she was kidnapped by a man who threatened to rape and kill her if she “did anything stupid”, followed by how she jumped out of his car, injured herself badly and had to get up and run was also widely shared. Others shared posts of missing women followed by #MenAreTrash while at other times, the hashtag was used as a response to a tweet or any post that was inappropriate towards women. The movement however has been met with contrasting views from different individuals in society.


Below, I discuss the #MenAreTrash movement in an attempt to make clear what the aim of the movement is. A common response to #MenAreTrash is that not all men are trash. That is, not all men burn, rape, or murder women and children. Let’s put this on hold for now.


#MenAreTrash is not about singling out individual men nor is it about specific men. The movement does not aim to avenge harmful relationships and it isn’t even about the bitterness of women even though it started as a response to numerous crimes against women and children and with women telling stories about abuse by intimate partners and strangers. If a person understands the movement in this way, they do not understand the anger, fear, and pain South African women and women globally experience on a daily basis. This movement is not one to be interpreted at surface level. #MenAreTrash does not only apply to men who abuse and kill women and children but also applies to those men who cat-call women and are complicit when it comes to the injustices women experience in the workplace, men who listen to stories of woe about the female lived experience but still do nothing about it because “It’s not my problem, it wasn’t me so, I did nothing”. The hashtag is about how men as a group or collective have created a world that is unsafe for women to live in. It aims to highlight the fact that being a man comes with privileges that women don’t have. It takes the debate about masculinity including what it means to be a man beyond the ideal constructed masculine identity as it urges men to take a hard look at themselves and evaluate their behaviour towards women. It gives credence to the fact that as women, we understand that the world is not built for us, that unlike men, in order to create our realities we constantly have to push and break barriers and boundaries because we are not recognised. #MenAreTrash creates awareness about the issues society takes for granted which perpetuate patriarchy.


As more and more women continued to tell terrifying stories and sharing their experiences and as more and more women and children went missing, a new hashtag – #NotAllMenAreTrash in response to #MenAreTrash started doing the rounds. #NotAllMenAreTrash was endorsed by both men and women. In response to Karabo’s murder, some shared in the victim-blaming arguing that in their personal lives they do not attract trash because their boyfriends, brothers, and husbands were not trash further arguing that women who believe that men are trash need to “reprogram their minds”. Some went as far as saying that Karabo’s murder occurred because she did not want to leave her abusive boyfriend because of his money (Khoza, 2017). Some men felt that #MenAreTrash was unfair to those men who have not done anything to hurt or harm women and was therefore a bad generalisation, thus necessitating #NotAllMenAreTrash. 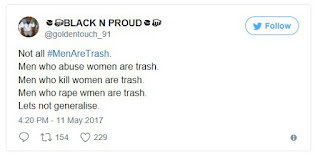 Here’s what #NotAllMenAreTrash really means.  When this hashtag is brought up, what it does is silence women. It allows its supporters (both men and women) but specifically men to tell women that they do not know what they are talking about and should keep quiet because the way they behave and act is a performance of their privilege. By saying that not all men are trash, men are defending themselves, they are not held accountable nor taking responsibility for their actions. As a result, it will take some time for men to take their place in the fight against gender-based violence. If it is said that #NotAllMenAreTrash, why is it that not all men have the courage to speak up when their male friends are mistreating a girl/woman, when they see another man slip something into a woman's drink and just accept it as being “one of the boys”, or when a girl/woman who is drunk and ends up being taken advantage of is told just to keep quiet because “she was asking for it”? When #NotAllMenAreTrash is brought up, it allows men to continue performing socially acceptable toxic masculinity without consequence. Further, when a person argues that they do not attract trash because they have a great boyfriend, brother, or husband (whether this may or may not be true), the very real patterns of abuse, rape, femicide, and toxic masculinity that the #MenAreTrash movement aims to expose are obscured. It undermines the aim of the movement further diverting attention away from the oppressors to the oppressed.
The discussion about the #MenAreTrash movement is still to continue. In summing up this discussion, I want to say the following: In the society we live in, being a woman has become a very terrifying experience. Every day I am more paranoid than I was the previous day. I leave home hoping that what happened to many other women and children out there will not happen to me or anyone else. Many men do not know what it is like to feel powerless because of one’s gender especially in a society that allows men to exercise their power over women with little or no real consequence. Men do not have to be rapists or abusers to be called trash because most of the time men ignore their friends when they call a girl a wh*** and ignore their other friends who spike a girl’s drink. This is where trash starts – when men do not show each other the way. #NotAllMenAreTrash makes things worse as it perpetuates existing ignorance with regard to the issues women are vulnerable to. My response to this hashtag is that it does not matter if not all men are trash because there is no way of telling. The #MenAreTrash movement is not an attack on men. What the movement aims to do is address the patriarchal privilege that men have enjoyed since the beginning of time. It is a call for action and a cry from women who are asking for their freedom. We are not asking men to protect us but to respect us enough to treat us like human beings, not as objects for their amusement or pleasure. As the movement continues to gain momentum there will be people who support the movement and people who will get touched and become defensive. This is okay because the immediate shock and discomfort that comes with this movement is exactly what is necessary if we are going to have honest conversations about how to address gender-based violence in society. In the meantime, I, like many other women out there will continue to live in fear.

This article was written for and originally posted on the Critical Studies in Sexualities and Reproduction (CSSR) blog. The link to it can be found here https://www.ru.ac.za/criticalstudies/latestnews/menaretrashwhatisthismovementreallyabout.html

Posted by Feminism & Psychology at 06:01