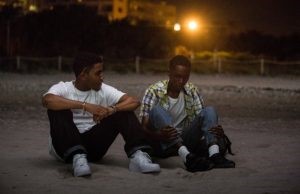 The boys walk through the school quad playing the dozens, verbally slamming another boy in absentia for being a weak “f—g” who can’t be trusted.  It’s part of the “accepted” ritual of masculine schoolyard talk, a violent dance of bonding and ostracism that every queer and cisgender boy must navigate; one that is powerfully dissected in Barry Jenkins’ Academy Award-winning film Moonlight.  For conscious educators who mentor and teach black boys, Moonlight’s searing evocation of the tender, ambivalent arc of black male attraction from elementary to adulthood was a welcome antidote to caricatures of hip hop hypermasculinity.  As educators attempt to safeguard students from the latest criminalizing wave of Trumpist homophobia, transphobia and heterosexism, Moonlight offers teachable moments for a humanist, culturally responsive education that centers black queer lives.


At a recent teacher training I conducted on creating safe spaces for LGBTQI high school students, a teacher asked why it was necessary to “call attention” to issues of sexuality and difference when LGBTQI students were already marginalized?  Shouldn’t educators just treat everyone with the same dignity and respect “regardless” of sexual orientation? Educational justice activists have long argued that the colorblind ethos of classroom instruction disingenuously ignores how the values and mores of the dominant culture indoctrinate us into binary norms.  In her book Other People’s Children, educational justice writer Lisa Delpit  argues that mainstream classrooms are structured around an implicit “culture of power” which disenfranchises students of color.  Consequently, a “treat everyone with dignity and respect” approach that isn’t based on a critical consciousness about how the dominant culture works undermines intersectional identities.  In the classroom, everyday assumptions about interpersonal and romantic relationships “invisibilize” queer students.   Classroom discussions about traditional straight families headed by heterosexual parents and caregivers perpetuate the idea that good, normal family units are straight family units.  Assumptions that everyone has been brought up in a conventional family structure based on a universal nuclear family norm that is uncritically faith-based, brand queer, foster, homeless and secular youth as other.


Moonlight breaks down these assumptions in often conflicting ways.  Though the film’s protagonist Chiron lives with his drug-addicted mother he’s mentored and “fathered” by an older black man, played by Mahershala Ali, who accepts him as gay.  His loving surrogate family supports him in ways that his brittle, largely absent mother cannot.  Ali’s delicately shaded character becomes Chiron’s first crush and compass, while the women in his life are reduced to caregivers or scolds.  Although its depictions of black women play into stereotypical binaries of black womanhood, Moonlight succeeds in foregrounding how black queer youth are often criminalized when they attempt to express themselves and/or defend against bullying and harassment.  The film’s evocative rendering of black male relationships encourages discussions about the ways in which black boys are socialized to fit into the so-called “Man Box”.  These limitations require them to act hard, emotion-less and aggressive in order to avoid being singled out as different.


During a recent Women’s Leadership Project student workshop on rape culture and sexual violence featuring activist, filmmaker and TFW editor Aishah Shahidah Simmons, young men of color at King-Drew Magnet High School in South L.A. talked about how they’re forced to conform to these roles or risk ostracism, ridicule or violence.  In Moonlight, Chiron is goaded into fighting his campus tormentor because of a menacing environment in which he’s constantly taunted and harassed about being gay/effeminate.  This is a familiar scenario in K-12 schools where a climate of fear and intimidation among boys (across race/ethnicity and class) is virtually institutionalized, embodied in sports culture and the often perilous ecosystem of the campus quad.  Yet, traditional anti-bullying training which fixates on “dignity and respect” ignores the way strict messaging about gender non-conformity shapes the behavior and identities of youth.  Writing about a scene in Richard Wright’s Black Boy, in which Wright kills a kitten in order to best his emotionally unavailable father, students from my South Los Angeles-based Young Male Scholars’ program commented that the dominant 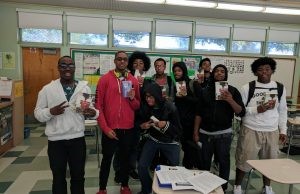 culture’s failure to show loving representations of black fatherhood plays a strong role in the sometimes aggressive relationships they have with each other.  In Black Boy, Wright learns violent masculinity navigating Jim Crow society, black patriarchy and his family’s “spare the rod, spoil the child” religiosity.  His relationships with other boys are largely adversarial, based on boasts, one-upping and his peers’ intimidation by his intellectual curiosity.  Early on, Wright’s father becomes the negative role model he inadvertently ends up emulating in his struggle for daily survival. Though Wright was straight, his childhood trajectory as a poor, skeptical outcast forced to fend for himself and “become a man” within the context of unrelenting violence, is similar to the young Chiron’s.  Faced with constant slights and attacks, Wright closes himself off emotionally from the world. Similarly, Chiron withdraws from all but a few of his peers, and his muteness becomes a metaphor for society’s failure to see or hear him.  Yet, Moonlight’s concluding scene between Chiron and his nemesis/soulmate gestures toward healing and reconciliation.  Overall, the film’s timely exploration of trauma, tenderness and caring between men is an antidote to the heterosexist swagger of the Trump administration.  Re-visioning relationships between boys and men and countering the violence of homophobic, transphobic and heterosexist trauma is central to fighting sexism and misogyny.  K-12 educators have a signal role to play in shaping classroom practice, school culture and curricula that takes up this charge, and supports the intersectional lives our youth live.


Cross-posted with permission from The Feminist Wire where this post originally appeared.