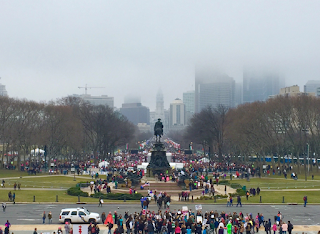 Wanda Sykes, casually sipping the straw of a fountain soda, saunters up to a group of young boys seated in a fast food restaurant and confronts them about the language they’re using to criticize what they have deemed an unbecoming little statue.


The trio of teens are taken aback by Sykes and stunned into silence by the time she concludes: “When you say that’s so gay, do you realize what you say? Knock it off.” I first saw this ad last week while indulging in a mindless reality TV show and folding laundry. The message caught me off guard.


Like a whole lot of folks – hundreds of thousands of amazing folks – in the U.S. and around the world, I’ve spent the past few weeks being outspoken while occupying various public spaces. It’s incredible to gather alongside thousands of others who share in my discontent and my desires, to see how many people are also fed up with the sexism and racism, the marginalization and criminalization that have proliferated over the past few months, not to mention been overlooked and allowed to fester for many years.


These ongoing protests, marches and rallies create spaces where people can feel confident and supported by the surrounding crowd; they validate and give voice to the daily, individual experiences of women, people of color, immigrants, queer and trans people, and other marginalized folks. And yet, despite being fired up and feeling a sense of solidarity through so many of the unified chants and colorfully creative signs spelling out what we want or what we’re opposing, I’ve found myself stuck on certain insinuations embedded within some of the words and imagery I’ve spotted.


Amid these protests and present-day debates about free speech, coupled with an immense rise in reports of hate speech and physical assaults, it feels like no coincidence that this public service announcement, originally shot several years ago, would suddenly surface in online streaming ad breaks. As resistance to the current administration’s policies continues, and many of us who are privileged and able continue to show up, we need to consider what values are embedded in our criticisms, and what ideas about each other’s bodies and behaviors we may be explicitly or implicitly reinforcing. 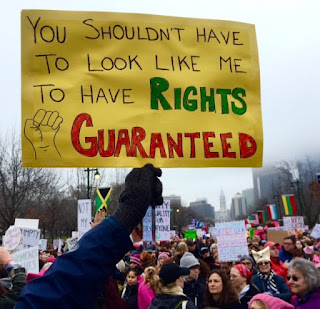 Slowly shuffling up the Ben Franklin Parkway on the morning of the Women’s March, I was overwhelmed. The sheer number of people crowding the street was unbelievable; a vast array of physical forms clad in bright hues, energetic children and elder adults, people of all sorts holding hands, chatting, cheering and greeting one another. This wide breadth of bodies afforded me and many others a context within which to amplify our voices, to say: this is not your body to touch, to take or to talk about, or to treat however you want. This public, physical presence of a collective body speaking peaceful (albeit loud) demands is what makes protest powerful and persuasive, both for those witnessing from afar and for those within the moment, experiencing this sense of community.


There were endless signs declaring love, showcasing drawings of Lady Liberty, and featuring witty quips that involved ovaries or cats. One particularly poignant piece of cardboard merely read, “You shouldn’t have to look like me to have rights guaranteed.” (Perhaps you can guess what this individual looked like.) There were also many, many signs criticizing the new president’s physical features and physique, and a handful of others here and there using homosexual imagery to criticize certain political relationships. Though far outnumbered by exclamations of empowerment and clearly the exception, these errant signs are important to pay heed to because they simultaneously reveal and reinforce unexamined assumptions about how “appropriate” bodies look and act. 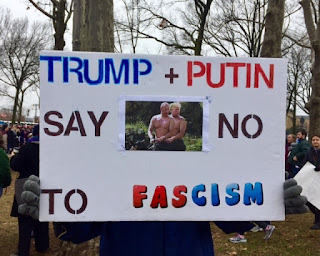 In bold blue and red lettering, the above sign states, “TRUMP + PUTIN SAY NO TO FASCISM,” and features an image of both men riding topless on a horse. At face value, this representation is an informal mockery of two political figures who have shown little concern for the harmful effects of their chosen rhetoric, behaviors, and policies. Weaving through the masses that day, this sign elicited chuckles from onlookers, shouts of support and groans of disgust. But when we stop to consider why this reads as funny or even gross in the first place, we can start to uncover the implicit messaging beneath the bare male torsos.


In the very same way that a teenager calling something “so gay” signals to peers and bystanders that being anything but ardently heterosexual is at best abnormal and at worst unsafe, signs that serve up homoerotic imagery to provoke at best a cheap laugh or at worst revulsion are also signaling something to those in the vicinity. Amongst a crowd of so many strangers, all from different backgrounds and living varied lifestyles, these signs render the behavior of men in suggestive embrace a source of ridicule and shame. Not only that; such statements reify norms of what it means to be a supposedly masculine man, and conversely a suitably feminine woman, and the need for a clear distinction between the only two “acceptable” ways of existing. Masculine heterosexuality emerges as the norm (the only space not subject to jeers), and anything veering from it – such as two men appearing effeminate in their intimacy with one another, regardless of who they are – becomes a synonymous stand-in for the preposterously humorous, incorrect and ultimately immoral.


Imagery that relies upon these dualistic arrangements of masculine/man and feminine/woman inevitably reinforces stigmas attached to supposed “right” and “wrong” ways of being. I started discussing the problems intrinsic to such binaries in my analysis of Peter Berg’s Patriot’s Day. This formula of “if not one, then the other” always diminishes “the other” as something unsavory and undesirable, and erases any gray area. The reality, however, is that most – if not all – of us live in the ambiguous in-between. Notions of masculinity and femininity are ideals that folks of all genders try on here and there, at various moments in our days, but there is no way to embody all the traits of a flawlessly “masculine man” or “feminine woman” all the time.


And what are these traits anyway? If you take a few minutes to list out all the components of these categories, and then try to fit yourself into one of them, odds are good that you’ll find yourself reflecting on the many moments when you simultaneously enact elements of both. What’s more, your list will inevitably vary from that of your friend, your partner or spouse, or your siblings. Clear-cut prototypes simply do not exist in the flesh; and yet we consistently allude to and draw from this illusion in order to define ourselves and those around us. The broad similarities between our lists are what we’ve come to understand as “normal,” and these assumptions help inform what are considered the seemingly acceptable ways to act if you appear as a man or woman (and, in the latter, let’s not forget acceptable ways to dress). They also allow the denunciation – and justify the mockery, harassment and mistreatment – of performances that fall outside of this flimsy framework. The inability to ever fully envision, let alone achieve, “peak” masculinity or femininity is what makes these standards so compelling and resilient in dictating social standards and behaviors.


In the final image (not posted here), a photograph of Trump is coupled with a small cartoon cat, and the words “SHOW US YOUR TAX RETURNS! DON’T BE A P*SSY!” I definitely don’t disagree with the call for transparency but let’s take a second look at the implicit way in which this usage of “pussy” functions. Here, masculinity is questioned by slinging a slang term for vagina at a man. Not only is this sign attempting to discredit someone’s character and decision-making prowess by referencing a female body part, but it swaps pussies in for the presumptive weak or pathetic. It functions the way so many insults directed at men (usually by other men) do: it associates the male target with femaleness or femininity, thereby reinforcing the notion that femaleness is itself deeply shameful. Channeling the wise words of Wanda Sykes, why say pussy when what you actually mean is that someone is utterly ridiculous? 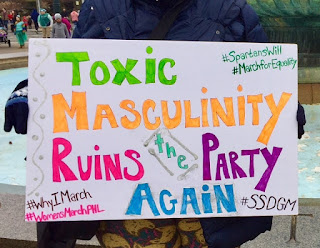 The Sykes PSA is part of a campaign, ThinkB4YouSpeak, developed nearly eight years ago by GLSEN in partnership with the Ad Council. It’s as relevant today as ever. The campaign was created to quell speech in schools that creates an “atmosphere where [LGBT teens] feel disrespected, unwanted and unsafe” (from GLSEN’s website). By influencing acceptations – and encouraging students, teachers and parents alike to intentionally consider the impact of their words – the campaign aims to also change perceptions of bodies and behaviors. Just like youth casually yakking over cheeseburgers and large fries, we all make choices about the words we use, whether we’re seated in a classroom or crowding the streets. And make no mistake about it: communication – language, imagery, and the social and cultural context through which it arises – is integrally tied to how we treat one another.


Even when directed solely at someone causing harm and fostering hatred, words reverberate in ways that impact others well beyond the moment in which they’re uttered. When related to our genders, sexualities and behaviors, language can overtly and subtly hurt us by leading to feelings of shame and isolation, and by letting others know what’s tolerable, who’s valued, and how to act. That’s not to say that we need to do away with or stop using images or words referring to sexuality, gender, or body parts. Rather, we need to carefully consider context and company, and the way in which our statements in turn work to legitimize certain treatments of other people.


There is a never-ending and complicated cycle between what is spoken, what is silenced, and what is sustained. The ThinkB4YouSpeak campaign was created eight years ago and remains disturbingly relevant. What’s perhaps more unsettling is the four, or possibly eight, years stretching ahead. As we continue to speak up and out in resistance, we must continue to value one another by being vigilant about the language we choose to use.